الشكوى الرئيسية CC
The patient was a prominent 52-year-old male entertainer who developed abdominal pain and fever after a blow to the abdominal wall.
القصة المرضية HPI
The patient's illness began during a performance in Montreal, Canada. While in his dressing room, preparing to go on stage, he talked with a student who asked whether or not it was true that the entertainer's abdominal musculature was so well developed that he could withstand strong abdominal punches. The entertainer invited him to try, and the student immediately landed several blows to his abdomen.

During his Montreal performance, the entertainer appeared to be in pain not only from his abdomen, but also from a recent ankle injury. He finished the performance, and then boarded a train for Detroit, where a sold-out audience awaited his next performance. Because the pain became much more severe, the patient wired ahead, asking for a physician to meet him on his arrival in Detroit.

About 48 hours later he arrived, feeling much worse. He was quoted as saying: "I'll do this show even if it's my last." Rather than disappoint the large audience gathered to witness his performance in Detroit, the performer, although acutely ill, immediately went on stage.

After performing, the patient returned to his dressing room where he complained of abdominal pain, which gradually increased and was accompanied by weakness. After struggling through his performance, he was examined by a physician.

الأجهزة الأخرى ROS
Other than the abdominal findings, the remainder of the physical examination was within normal limits. Initially his temperature was 102° F, but it soon rose to 104.
السوابق المرضية الشخصية PMH
The patent was a nonsmoker and nondrinker, but during his professional career he sustained many bruises and fractures. His most significant illness was a prolonged bout of hematuria from a suspected ruptured renal blood vessel.
السوابق المرضية العائلية FMH
The patient's father died at age 63 of cancer of the tongue. His mother died in her 70s from a stroke. He had five brothers and sisters, one of whom died from tuberculosis.
الفحص السريري Clinical Exam
A muscular male below average in height, the patient appeared to be acutely ill, complaining of abdominal pain and tenderness, especially in the right lower quadrant.
الاستقصاءات Investigations
After the physician performed the initial examination, the patient was then examined by a surgeon, who recommended surgery. The patient underwent an emergency laparotomy approximately 72 hours after the initial onset of his illness.

1. What is your diagnosis?

2. Who was our mystery patient?


complaining of abdominal pain and tenderness, especially in the right lower quadrant

i think he is Jerry Garcia

i know at least now that the first answer is correct

is he Ehrich Weiss`?

dr.tabban
﻿
After the patient completed his show, he returned to the Statler Hotel, where Daniel E. Cohn, a young physician covering for the usual senior hotel doctor, diagnosed acute appendicitis. On October 25, 1926, Dr. Charles S. Kennedy, Chief of Surgery at Grace Hospital in Detroit, operated on Houdini, discovering acute gangrenous appendicitis with peritonitis. A few days later Dr. Kennedy reoperated because of suspected ileus or obstruction. He died on Sunday, October 31, with the cause of death listed as "diffuse streptococcal peritonitis."
Our patient was Ehrich Weiss, much better known by his stage name, Houdini (1874-1926), which, even now, 80 years after his death, is familiar throughout the world.
Fri, 2007-03-09 22:40
(0 إعجاب) 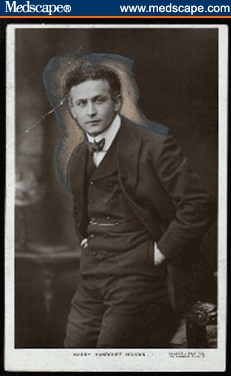 dr.tabban
﻿
How Would This Patient Be Diagnosed and Treated Today?
For more than a hundred years, there have been reports in the surgical literature linking appendicitis to prior trauma. The Table below summarizes reports published since 2000 for 7 patients (along with the addition of the Houdini case) in whom appendicitis appeared to be caused by abdominal trauma.[1-6] One striking finding is that all 8 patients were males, perhaps reflecting the increased frequency of traumatic injuries in general in males. Five of the 8 patients were younger than 21 years, reflecting the age distribution of appendicitis in the general population. By contrast, Houdini was 52 years old when he developed appendicitis after being punched in the abdomen. Only 1 patient, a 5-year-old boy, had had a previous attack of abdominal pain which had subsided spontaneously. The abdominal pain recurred a month later, immediately after the patient fell from a fence.

Diagnosing Traumatic Appendicitis
Even without the aid of additional modern diagnostic procedures, in 1926, when Houdini finally sought treatment, Daniel Cohn, the young physician who first examined Houdini, immediately diagnosed appendicitis, based only on the history and the physical findings, which included high fever and right lower-quadrant abdominal pain. Dr. Kennedy, the surgical consultant, agreed with the diagnosis, which was confirmed at surgery.

When appendicitis occurs in older patients such as Houdini, it is more likely to be misdiagnosed than when it occurs in younger patients. In one study the negative appendectomy rate was 10% in children compared with 19% in patients > 13 years of age (P = .003).[7] Conditions such as diverticulitis or bowel obstruction from previous surgery are much more common in adults than in children and can mimic appendicitis.

No history of abdominal pain prior to the injury;

History of a significant injury directly to the abdomen;

Time interval between injury and symptoms of 6 to 48 hours; and

Today, in patients for whom the diagnosis of appendicitis is uncertain, a computed tomography (CT) scan either with or without a contrast enema can clarify the diagnosis.

Pathophysiologic Mechanisms Leading to Traumatic Appendicitis
Was Houdini's fatal appendicitis attack caused by an injury? The evidence is still contradictory since both appendicitis and abdominal injuries are so frequent. We do not know if the association was due to chance or was causal. Undoubtedly, Houdini's stoicism coupled with his artistic temperament ("The show must go on!") led to a delayed diagnosis and surgery, which, in patients with acute peritonitis, increases the mortality rate.

It is difficult to identify the pathophysiologic mechanisms that might lead to acute appendicitis after a sudden abdominal injury. Increased intracolonic pressure is one possible explanation, but if this was the case, then one would expect that the same mechanism would lead to perforated sigmoid diverticulitis. However, traumatic diverticulitis is even rarer than traumatic appendicitis.[8]

Another mechanism might be increased intra-abdominal pressure, but it is difficult to understand why the appendix should be the main target organ, rather than other hollow organs, such as the colon or gallbladder.

Since most cases of appendicitis are caused by a fecalith, perhaps abdominal trauma might cause movement of an existing fecalith, leading to obstruction of the appendiceal lumen.

The real problem with establishing causality is that both appendicitis and abdominal injuries are common events, meaning that just by chance some patients will develop appendicitis soon after an abdominal injury, without implying any direct connection between the two events.

The major difference between today's therapy and the treatment Houdini received, however, is the availability of antibiotics. If Houdini had received antibiotics designed to treat both anaerobic and aerobic infections, he would have had an excellent chance of survival.

Brief Biography
Born in 1874 in Budapest, Hungary, Erich Weiss settled with his family in Appleton, Wisconsin, in 1878. At an early age he performed as a magician, changing his name to "Houdini" after Jean Eugene Robert Houdin, a famous French magician. At first Houdini did card tricks and other standard items familiar to magicians, but soon audiences preferred his more dangerous tricks, featuring escapes under the most unusual and unbelievable circumstances. He could regularly escape from the strongest handcuffs or other restraints, including straitjackets, prison cells, and locked boxes. Another specialty was escaping from or surviving confinement in containers, such as milk cans or sealed coffins. Houdini became the ultimate escape artist. His sold-out performances electrified audiences all over the world, including in major American and European cities. On a transatlantic voyage, one of his spectacular illusionist tricks completely mystified Colonel Theodore Roosevelt, soon to become the 26th President of the United States.
Houdini died on Halloween -- October 31, 1926. Adding to the unusual aspects of his death, Houdini's body was shipped back to New York in the bronze coffin which he had so often used during his dramatic escape acts. Thousands of mourners attended Houdini's funeral and accompanied his body to its final resting place in the Weiss plot located in Machpelah Cemetery, Queens, New York.

Houdini knew his death-defying acts involved considerable risks; therefore, as a precaution he took out life insurance policies with a double indemnity clause: if he died because of an accident, his estate would receive twice the face value of his policies. But was his death accidental? Based on interviews with all the key individuals, New York Life Insurance Company decided that it was, and all other insurance companies agreed. His widow, Bess Weiss, received an estimated $500,000.

A final note of interest: In addition to being an exciting, highly sought-after performer, Houdini had a deep interest in spiritualism -- particularly in exposing fakes. He mistrusted spiritualists, believing séances were fraudulent affairs. He shared an interest in spirit mediums with a famous physician-writer, Arthur Conan Doyle, creator of Sherlock Holmes. Doyle and Houdini met and became friends in 1919, when Houdini toured England. However, Doyle believed in spiritualism and psychic powers whereas Houdini spent considerable effort discrediting spiritualists. This disagreement led to an eventual rupture of relations between the two men. During his lifetime he promised his wife that he would try to communicate with her after his death; she waited patiently, but he never did. Nevertheless, even now, on every Halloween, the day of his death, some people still await a final message from this famous performer.

The memory of Houdini's magical skills and death-defying acts continue to capture our imagination. Houdini magic kits are still being sold; books about his life remain popular. There are museums and libraries that continue to display Houdini memorabilia. Other magicians have replaced Houdini, but few performers have been so dazzling. How did he do it? What special skills did he possess? Unfortunately, many of Houdini's secrets are unknown: he took them with him to his grave.